Mothers on Trial (Lawrence Hill Books, an imprint of Chicago Review Press, 9781556529993) received a STARRED review in the June 15, 2011 issue of Library Journal (circ. 18,465). They call the book, "fresh, [with] timely content" and say, “Heavily documenting her book with legal precedent, expert input, and studies, Chesler makes her case with all of her zeal intact.” The full review can be read below.


In this new edition of her 1986 groundbreaking book, Chesler, a psychotherapist and women’s studies scholar, retires dated material and adds eight new chapters. By supporting her original contentions with new cases, the author demonstrates again that despite commonly held notions, courtroom custody battles continue to victimize mothers and their children, too often favoring fathers who are abusive, neglectful, or otherwise unfit.

Chesler presents a good review of present-day legal trends, including the current darling of family courts, the joint-custody agreement. She relies on studies and experts to call into question the effectiveness of joint custody in all but the most mature and cordial of splits. Also new is a well-presented discussion of the challenges and biases lesbians face in custody fights with former husbands and the sometimes onerous conditions under which these mothers are allowed to retain custody.

VERDICT: Heavily documenting her book with legal precedent,
expert input, and studies, Chesler makes her case with all of her zeal intact. Fresh, timely content, extensive annotations, and a helpful listing of resources on women’s and children’s issues recommend this book for legal and women’s studies collections.—Joan Pedzich, Harris Beach PLLC, Rochester, NY

Mothers on Trial (Lawrence Hill Books, an imprint of Chicago Review Press, 9781556529993) was noted in an op-ed by author Phyllis Chesler on Fox News.com on March 8, 2011. The op-ed was adapted from Chesler’s 2011 women’s history month speech given to the New York County Supreme Court and can be read online here. 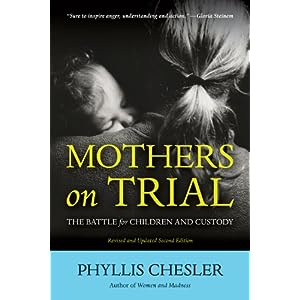 Updated and revised with seven new chapters, a new introduction, and a new resources section, this landmark book is invaluable for women facing a custody battle. It was the first to break the myth that mothers receive preferential treatment over fathers in custody disputes.

Although mothers generally retain custody when fathers choose not to fight for it, fathers who seek custody often win—not because the mother is unfit or the father has been the primary caregiver but because, as Phyllis Chesler argues, women are held to a much higher standard of parenting.

Incorporating findings from years of research, hundreds of interviews, and international surveys about child-custody arrangements, Chesler argues for new guidelines to resolve custody disputes and to prevent the continued oppression of mothers in custody situations.

This book provides a philosophical and psychological perspective as well as practical advice from one of the country’s leading matrimonial lawyers. Both an indictment of a discriminatory system and a call to action over motherhood under siege, Mothers on Trial is essential reading for anyone concerned either personally or professionally with custody rights and the well-being of the children involved.

Phyllis Chesler is an emerita professor of psychology and women's studies at City University of New York, a psychotherapist, and an expert courtroom witness. She is the cofounder of the Association for Women in Psychology and the National Women's Health Network, a charter member of the Women's Forum and the Veteran Feminists of America, a founder and board member of the International Committee for the Women of the Wall, and an affiliated professor with Haifa and Bar Ilan Universities. She is the author of Women and Madness. She lives in New York City.