BLOGGING ON THE BENCH, THE BAR, BARRATRY, BEDLAM AND BOYCOTTS FROM THE PLACE IN NORTHERN VIRGINIA WHERE FIT-LOVING-NONOFFENDING MOTHERS BEAT UP BY LOW CALIBER JUDGES TEAM UP TO TAKE THEM DOWN, AND OUT

My custody order is not coherent. With one document, the judge relies on the report and recommendation of a court appointee and removes the court appointee. I am seeking an attorney who will agree my custody order is not logical and help me annul the order. (I am not asking for a trial, just a simple motion.) Thank you very much. Veronique Wyvell, Fairfax County, Virginia, Tel. 703.748.0072

THE JUDGE AS BATTERER (NO WONDER THAT, MORE THAN EVER BEFORE, WOMEN IN DOMESTIC VIOLENCE CASES EVERYWHERE ARE ON THE RUN, BOLTING WITH THEIR CHILDREN, IN A GLOBAL BACKLASH AGAINST BARRATRY AND A WORLDWIDE BOYCOTT OF THE BENCH): A SAMPLING OF 25 YEARS OF SUPPORTING LITERATURE [ List of authorities subject to regular updating on the bedlam]

'Exit brilliantly' with a little help from Va. guru of divorce Zarozny because not even Sen. Janet Howell will give a hoot if your case goes all wrong

iReport — She helps people "get unmarried" and manages a website calledBrilliant Exits.
The Washington Post has written about her and so has Fairfax Woman. Her name is Sharon Zarozny, her business divorce counseling and divorce coaching. I highly recommend that anyone wanting to leave a marriage in Northern Virginia call her before they call that attorney. She's going to try to keep you out of court or at least try to keep you safe if not going to court is not an option. (She is not for you if an all-out custody war is what you are craving.) She will warn you that many attorneys are "in it to win it."
"They don't have to care about what's left of your family," Ms. Zarozny told Amanda Long last August during an interview for First Person Singular. She's right. And it's a rare divorce lawyer who doesn't consider a monied,narcissistic professional a "good catch." I've seen family lawyers prostitute themselves and throw ethics to the wind to satisfy the narcissistic urges of a wealthy abuser (and how often are narcissistic urges "family-friendly?"). I've seen judges go along, even seeming to "enjoy the show": How the Bench Stole Christmas. Click, read and see how I have tried hard to solicit the support, and concern, of my state senator. Janet Howell didn't care, doesn't care still.*

People like Sharon care. She's a good find. We mothers, especially, are lucky to have her. I am cautioning you: nobody will give a hoot if your case goes all wrong (not even the state senator for your district whose most important responsibility as your elected public servant is to appoint good people to the bench). So don't let it happen, do your homework, get informed. Get "court smart."
See Sharon, and make yours a brilliant exit.
~V. Wyvell, Mommy Go Bye Bye blogger, CNN iReporter
A CNN iReport: http://www.ireport.com/docs/DOC-378969

Women often don’t know how to safeguard their rights, nor can they circumvent corruption that’s built into the legal and judicial professions
[ Source: U.N. Tackles Universal Problem for Women: Divorce ] 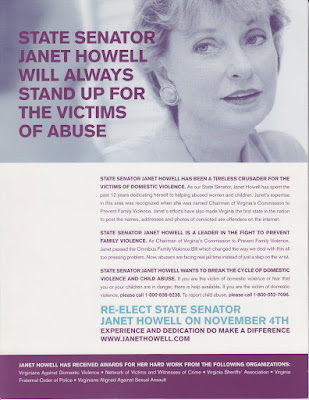 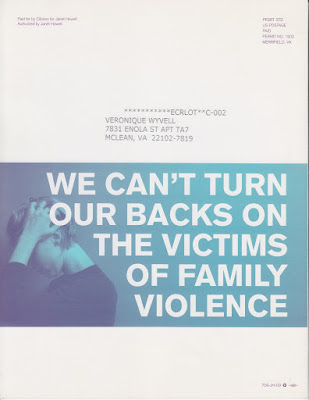 I
have
lived
with

State Senator Janet Howell says she
"has been a tireless crusader for the victims of domestic violence."


I am abused by judges who were
screened, appointed, and confirmed
by State Senator Janet Howell.

~ Veronique Wyvell ~
How I became an opportunity