KS Appeals Court: ‘Mother entitled to full custody hearing’ – After Case Manager reverses Child Custody from Mother to Father…..Ya think? Really? In a Court of Law? Damn this just gets more and more interesting all the time……

“The bottom line is, that case managers and others have NO BUSINESS at all – in the family courts, it is an oxymoron to have the Court of Appeals rule that a ‘law’ should be followed, when the most basic of all law is due process.” 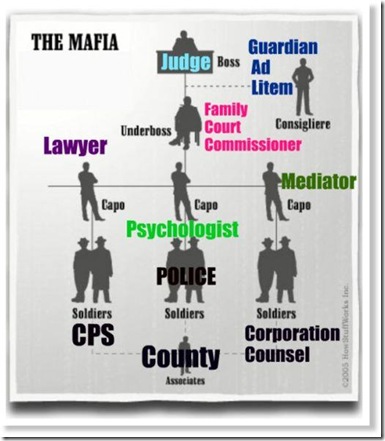 I cried when I heard the news below, for many reasons.

1. I always think of my daughter Rikki, had this been law would it have changed what happened to her and I? For 6 years we fought for a hearing after a now JUDGE, LLOYD C. SWARTZ (had been case manager) severed all contact between this mother and her child. It was not until 2010 that there was finally a hearing on it – SIX years later, although for 6 years this mother wrote motion after motion for hearing….. judge after judge it went through, never to be heard, never any of the basic fundamental rights of ‘due process’…..

And; when that hearing did finally come, the GAL (M. Jill Dykes) with the court appointed ‘psychs’ (David C. Rodeheffer) had taken over where the case manager (Lloyd C. Swartz) had left off….

2. Even though, there will now be ‘hearings’ on the perversion of    justice - (where again - none should be) - the ‘house of gold’ has become brighter by other profiteers such as BUD DALE – GAL’s and other third party access to justice interferers.

I cry. Nothing has changed except for the Increase in profits from the other child traffickers.

There will only be Justice – when Justice is allowed. There can never be justice, when Therapeutic Jurisprudence is allowed.

Therapeutic Jurisprudence: The Trial Within a Trial http://bit.ly/a2yslz

The bottom line is, that case managers and others have NO BUSINESS at all – in the family courts, it is an oxymoron to have the Court of Appeals rule that a ‘law’ should be followed, when the most basic of all law is due process.

The Kansas Court of Appeals ruled Friday that a mother who lost residential custody of her child based on a case manager's recommendation is entitled to a full evidentiary hearing.

Karen Williams, formerly Karen Wray, became an outspoken proponent of the need to reform the state's child custody case management system after the lower court limited her to once-a-week visits with her daughter without giving Williams an opportunity to hear and respond to the case manager's recommendation.

In a decision written by Judge Karen Arnold-Burger, the three appeals judges noted that the laws establishing case management do not explicitly require a hearing on case manager recommendations, but parents have a right to due process under the 14th Amendment when a fundamental liberty like the custody of their children is at stake.

"Although this holding may result in courts having busier dockets," the decision states, "the information received at such a hearing will aid the courts in deciding whether the case manager's recommendations are in the best interests of the child and insure that due process, one of the most sacred and essential constitutional guarantees, is provided to the parties."

The three appeals court judges found that case manager recommendations that change legal custody or residential custody, or significantly change parenting time warrant a full hearing if they are contested.

The judges sent Williams' case back to the Douglas County court where it originated for a full hearing.

Williams called the decision "such a relief," though she said she was disappointed the appeals court did not grant her request to remove the case manager and district court judge who appointed her. Williams may face the same judge when she has her hearing in Douglas County, but she said she's confident she can regain residential custody of her daughter.

"I know that once we're allowed to present evidence, there's no way you can look at this and say that what has happened is righteous and fair," Williams said. "That's what I wanted is to be given the opportunity to present it and they're giving us that opportunity."

The Legislature authorized the judicial branch to appoint case managers to negotiate visitation in "high-conflict" divorces a little more than a decade ago. Since then, parents and lawyers have expressed concern that case managers have broad authority and little accountability.

Ron Nelson, a Lenexa family law attorney who represented one of the parties in a similar case that went to the appeals court in 2000, called Friday's ruling "a very good decision." Nelson said it goes farther than any previous ruling in establishing that the court is the final authority on child custody changes, not the court-appointed case manager.

"This decision certainly pulls back from what seemed to be the way that case management approvals were going," Nelson said. "Which was that they were rubber-stamped, either in a hearing or out of a hearing."

Williams says that's what happened in her case.

Williams' daughter was born in 2001, and she filed for divorce from the girl's father a year later. The two retained joint legal custody, but Williams had residential custody and her ex-husband had weekly visits. That arrangement held until February 2011, when Williams told the case manager, Cheryl Powers, that she was remarrying and moving to Marion.

In response, Powers recommended that the court reverse the custody arrangement. According to the court decision, Powers believed Williams had a history of alienating her daughter from the child's father and "this alienation would only increase if she were allowed to move away with the child."

That led Williams to appeal to the higher court, which was unusually caustic in its evaluation of Powers' response to Williams' request for her removal.

"The tone and content of Powers' subsequent response to Wray's objection can hardly be described as a professional report from a neutral factfinder or facilitator," the judges wrote.

"You don't see that kind of language very often," Nelson said. "Saying it's essentially an unprofessional recommendation and reaction is kind of strong language."

The Legislature moved to address some of the concerns about case managers last session by requiring they hold a professional license. But legislators decided to wait and see how the court would rule in Williams' case before taking further action.

Dale said he will propose a minor procedural fix next session, but the court addressed most of his concerns. Nelson said there's still work for legislators to do.

"This (decision) certainly helps and provides some solace that case management is not quite the railroading it's been perceived to be," Nelson said. "But there still needs to be more standards and more direction from the Legislature than this opinion really gives."