This case is still pending at the IACHR. We expect a ruling any day. The last that we heard the commission had asked for more information from the petitioners that request can be seen Follow up request from the commission 2013. I supplied the requested information of my part in February 2013. I have also started a file that can be viewed here related to the IACHR.

Since the information is no longer available via the stop family violence website,  a reconstruction of that site is here.

Full Text of IACHR Petition. On May 11,2007, just before Mother’s Day weekend, ten mothers, one victimized child, now an adult, leading national and state organizations filed a complaint against the United States with the Inter American Commission on Human Rights. Their petition claims that U.S. courts, by frequently awarding child custody to abusers and child molesters, has failed to protect the life, liberties, security and other human rights of abused mothers and their children.

Full Text of IACHR Petition. On May 11, 2007 - Just before Mother’s Day weekend, ten mothers, one victimize... by AnotherAnonymom

Shared Custody Issues in the Context of Domestic Violence 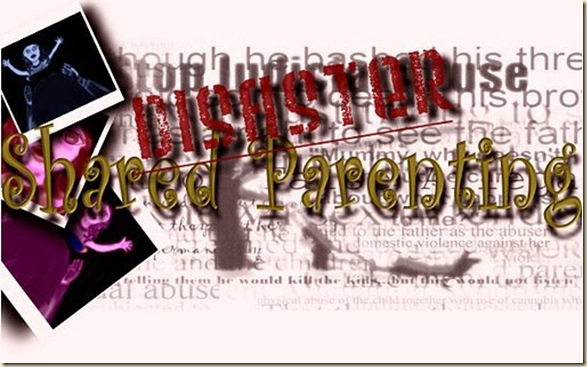 In a Queens New York custody case, the court appointed a prominent psychologist to evaluate a young couple. The psychologist was frequently used as an expert in the New York courts despite a fathers’ rights bias that included a quotation in a New York Times article supporting shared parenting. Throughout his testimony supporting the abusive father, the evaluator could not respond to any of my questions asking for research to support any of his claims. Finally I asked him if there was any research to support his belief that children benefit from a 50-50 division as compared to 70-30. He cited Judith Wallerstein, but could not cite a particular book or article. A colleague put me in touch with Ms. Wallerstein who sent me an email for my continued cross-examination of the evaluator. She said that earlier research had indicated shared parenting might be beneficial in cases where the parents are able to cooperate, but more recent research has demonstrated that shared parenting is in fact harmful to children. One of the problems in our custody courts is that this psychologist, like most experts relied on by the courts does not have the knowledge of up-to-date research or the ability to apply it to custody cases.

Shared custody, sometimes referred to as joint custody involves joint decision making by the parents and sometimes also requires something close to a 50-50 division of time with each parent. The equal time division is often important to parents wishing to avoid paying child support. Proponents of shared parenting say it is only fair that parents have the same rights to parenting time with their children and courts claim that they must treat each parent that comes to court equally. This seems fair unless we understand the unstated part that parents should be treated the same regardless of the quantity and quality of time each parent spent with the child before the separation. Research about primary attachment is not controversial and demonstrates that a child’s primary attachment figure is more important to the well being of a child than the other parent. Furthermore, although research supports the belief that children benefit from having both parents in their lives, this is not true if one of the parents is abusive. Nevertheless many courts think it is their obligation to treat each parent the same even when one is much more valuable to the child.

Custody When Neither Parent is Abusive

The concept of shared parenting was supported by an initial study that found a favorable response. Courts were delighted to support shared parenting because it served as a way to compromise a difficult issue and could remove many cases from an already crowded calendar. Abusive fathers who had little involvement with the children during the relationship strongly supported shared parenting as a way to avoid child support and maintain access and control over their victims.

The initial study was based on a very limited population and most favorable circumstances that included parents who enthusiastically supported the use of shared parenting, were able to cooperate and lived close together. Later studies that included larger populations and more long term effects of the arrangement demonstrated shared custody to be harmful to children, but these studies failed to dampen the enthusiasm for shared custody in the legal system and by abusers.

The studies found that children with two homes in reality had no homes. Children forced to bounce back and forth between their parents’ homes were denied a sense of security and continuity. They could not spend the time with friends that they wanted and often could not participate in a variety of activities because they had to be with the other parent when some of the events occurred. Children were often embarrassed when articles they needed for school or other activities were left in the wrong home. In other words, even when parents were able to cooperate, the shared custody arrangement placed added pressure on the children and made their lives more difficult. Their success in academic studies and social interaction was negatively impacted by the shared custody arrangement.

Many of the laws and proposed legislation seeking to promote shared custody purport to contain language to create an exception for domestic violence cases and sometimes for other cases in which the parties are unable to cooperate. There is a good reason to treat domestic violence cases differently as shared custody is particularly harmful to children when one of the parents is an abuser. A parent cannot co-parent with an abuser because it is unsafe to challenge him and compromise is impossible when there is unequal power. The fundamental problem, too often missed by courts is that abusers are willing to see their children harmed in order to maintain what they believe is their right to control or punish their partner. Most contested custody cases that courts mistakenly label “high conflict” are in reality domestic violence cases in which fathers use the common abuser tactic of seeking custody to maintain control of their partner or punish her for leaving. Children who witness domestic violence (including non-physical abuse) are more likely to engage in dysfunctional behavior when they are older. Depending on their age when they witness his abuse, their stage of development is disrupted. All batterers have been found to engage in harmful parenting practices including undermining the relationship with the other parent, teaching bad values (sexism) and providing a bad example. In other words, up-to-date research establishes that abusers are not appropriate candidates for custody or shared custody.

There is now a specialized body of knowledge about domestic violence, but too often judges and the professionals they rely on are overconfident in their own understanding of domestic violence and fail to consider up-to-date research. Judge Mike Brigner wrote in his chapter for DOMESTIC VIOLENCE, ABUSE and CHILD CUSTODY that when he trains judges they often ask him what to do about women who are lying. When asked what they mean, they cite women who return to their abusers, fail to pursue petitions for protective orders, don’t have police reports or hospital records and the myth that women frequently make false allegations of abuse to gain an advantage in litigation (in reality this occurs only one-two percent of the time). None of these behaviors indicates the women are lying and in fact this is often the safest response they can make particularly when still living with their abuser. Similarly inadequately trained professionals often cite the fact that the children did not seem afraid of the alleged abuser when they observed them as proof the allegations are false. The children understand what the “experts” don’t that the abuser is not going to hurt them in front of others and in fact they could be punished if they demonstrated fear in public. Many professionals in the court system believe they have the ability to determine who is lying just from observation. In fact research shows that aside from a very few elite CIA and FBI agents, no one has been shown to possess this skill. Accordingly these professionals through this belief become more susceptible to abusers who are skilled manipulators. While the unqualified professionals often discredit allegations of abuse for these and other invalid reasons, they fail to look at the pattern of controlling and coercive behaviors that would help them see the pattern of abusive behavior.

The result of this and many other mistakes by professionals in the custody court system is that thousands of children are being forced to live with abusers and many protective mothers, who are wrongly dismissed as disgruntled litigants and denied any meaningful role in their children’s lives. Legislatures and courts should be focusing on using the available up-to-date research to protect the safety and secure the potential of children caught up in domestic violence custody cases. Today, shockingly, courts are getting a majority of domestic violence custody cases wrong. This is one of the reasons we recommend that all professionals receive not just general domestic violence training, but specific training in Recognizing Domestic Violence, Gender Bias and The Effects of Domestic Violence on Children. Until courts have and apply this information, our children will not be safe when courts decide their fate.

In domestic violence custody cases, the use of shared parenting does not save court time and resources, but rather only postpones extensive litigation at great expense to the parties and harm to the children. Abusers eventually contrive incidents as an excuse to seek sole custody or protective mothers are forced to seek custody because the abusers are hurting the children. Abusive parents with limited parenting skills use shared parenting to get their foot in the door while continuing to harass and abuse their former partners. Court professionals often pressure protective mothers to accept shared custody with their abusers and punish them for trying to protect themselves and their children. Over forty states and many other court districts have sponsored gender bias commissions that have found widespread gender bias. Gender bias is particularly hard to overcome because judges and other professionals engage in gender bias without realizing they are doing so. The studies have shown that in custody cases, mothers are given higher standards of proof, less credibility and are blamed for their abuser’s behavior.

When mothers seek to limit contact between their children and their abuser for safety reasons and courts routinely treat this as if she is trying to interfere with the relationship between the children and abusive father, this is an example of blaming mothers for the father’s behavior. Instead of courts pressuring the abuser to stop his controlling and threatening behavior, protective mothers often face retaliation and punishment for trying to protect their children. This is particularly common when courts fail to recognize domestic violence and then punish mothers who continue to believe their abuse allegations. Provisions in shared custody laws that purport to make an exception for domestic violence will continue to be ineffective as long as there is widespread failure to recognize domestic violence and to take it seriously. Accordingly shared custody laws are not beneficial in cases where the parties can voluntarily cooperate and create serious danger to children in domestic violence cases