There is a crisis in our nation's family courts. Judges are awarding child custody to abusers and pedophiles and punishing the safe parent who tries to protect the children from harm.  All Over America Battered Women Are Loosing Custody of Their Children To The Batterers When They Try To Leave To Protect Their Self And Their Children From Further Abuse. The Family Courts Are Routinely Giving Child Custody To Batterers And Pedophiles And Completely Separating The Mother From Her Child(ren). 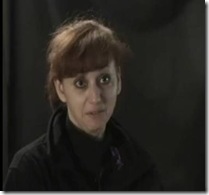 [IMPORTANT: The following audiovisual piece includes real-life interviews featuring disturbing verbal content and statements on child abuse and domestic violence. Viewer discretion is advised.] Prof. Garland Waller produced "Small Justice: Little Justice in America's Family Courts" which is an independent documentary that explores the relationship between domestic violence, child sexual abuse and custody laws in America. To learn more about the stories of the women seen in this 10 minute clip, please go to http://batteredmotherscustodyconferen...Jessie Beers Altman, a graduate student in the College of Communication, was in charge of editing this video.For more information of Boston University's Department of Film and Television at the College of Communication, visit: http://www.bu.edu/com/ft

Both guests are battered women and custody experts and advocates, and they are the editors of the book “Domestic Violence, Abuse and Child Custody”, an in-depth look at domestic violence, child custody, abusers, and our court system. Their research will be presented at the Ninth Annual Battered Mothers Custody Conference in Albany, NY (January 2012). Barry Goldstein is an attorney, teacher, author and advocate for women abused by their partner (and too often the courts). Dr. Mo Hannah is an Associate Professor of Psychology at Siena College and has focused her interest in abusive dynamics and their impact on interpersonal relationships and in forensic psychology.  (Read More)

Full Text of IACHR Petition. On May 11, just before Mother’s Day weekend, ten mothers, one victimized child, now an adult, and twelve leading national organizations filed a complaint against the United States with the Inter American Commission on Human Rights. Their petition claims that U.S. courts, by frequently awarding child custody to abusers and child molesters, has failed to protect the life, liberties, security and other human rights of abused mothers and their children.  More http://www.stopfamilyviolence.org/info/custody-abuse/legal-documents/petition-to-inter-american-commission-on-human-rights

NATIONAL DOCUMENTARIES ON THE CRISIS IN FAMILY COURTS

Click the image or the link for the Entire Documentaries 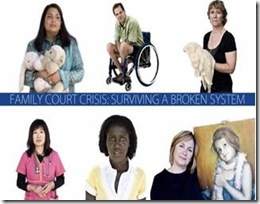 Faces of the Family Court Crisis 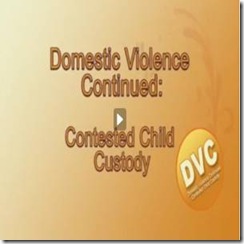