Domestic Batterers Do Not Need Help! They NEED PUNISHED!! Jailed and Kept Away from their Victims!

I listen to the local police Scanner and am simply amazed at all the poor batterer Domestic Violence calls—Daddy refusing to give children back after visits, kidnapping when mom does it- his kids when he does it, he is just stressed, addiction etc, etc, etc..... -sigh- 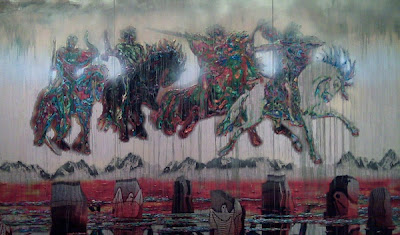 Photo by Gordon Cheung:The Four Horsemen of the Apocalypse

Women will never be free as long as they cannot leave an abuser a Violent Offender with her children, in fact - this is where they do the next best thing to killing her- they take her kids. With the Courts help. Stop treating this as a illness, a family thing it IS A CRIME!!!! We Do Not Need Safe Visit For Violent Offenders like 'Safe Visit' see prior post.

We do not need to treat them we need to punish them for crimes committed. Punish as you would assault cases. At least get rid of the DV clause -- or 'get out of jail free card'.

Domestic batterers find help in YWCA program Steve Halley leads small groups that provide help for domestic violence offenders through the Family Peace Initiative program, based at the Topeka YWCA, 225 SW 12th. By Phil Anderson Domestic violence is a widespread problem that often spirals out of ...

Kansas City Ends Domestic Violence Ordinance - Women on the Firing Line In October, the District Attorney of Shawnee County, which encompasses Topeka, Kansas, announced that he would cease to prosecute domestic violence cases within the city of Topeka. He argued that with recent budget cuts he no longer had sufficient resources and that the city should take on the burden of these prosecutions. The city council responded by repealing their ordinance against domestic violence!

Kansas has so much crap going on at the moment, Gov. Sam Brownback pushing couples counseling and ABSTINENCE?  It would be hysterically funny to even think this -- if it weren't true, that this, IS what they are doing.

I mean C'mon.... “Hey you perp… stop raping and beating your wife'. Yeah, that will sure fix it.

State's proposed domestic violence contract widely criticized But the two sentences are still inappropriate in a proposed contract for domestic violence services, no matter the rationale, said state Sen. Laura Kelly, D-Topeka, ranking minority member of the Ways and Means Committee and the Public Health and ...

That is by the way DADDY WELFARE!!

I Expect The Four Horsemen of the Apocalypse To Ride In Soon.


U. S. Fatherhood Initiatives - Control of Women and Children Under the Guise of "Responsible Married Fatherhood"

Attention Judges and Lawmakers: This is the REAL AGENDA of the Father’s Rights Movement