Eleven Hundred Torches seeks to encourage hundreds of ordinary citizens to serve others. Inspired by the life of advocate and activist Jana Mackey, and motivated into action by her death, this national campaign has been created to inspire others to make a difference

Young social activist and feminist, Jana Lynne Mackey, was taken from this world before her noble and inspiring work was completed.

She dedicated her short life to pursuing social justice and equality for all. Jana was locally and nationally known for her advocacy for women’s rights.  This 25 year old KU law student had worked on several state and national political campaigns, served three years as one of the youngest lobbyists at the Kansas State Capitol for the National Organization for Women and the Kansas Equality Coalition, and she had volunteered endless hours caring for sexual assault and domestic violence victims.
One dear friend said when describing Jana, “Never was there a more caring, more compassionate, more brilliant woman with each of these qualities and more wrapped into the heart of one activist.”  Jana Mackey represented all that is good in this world.

To learn more about Jana, please see the links below:

Thanks to the energy, passion, and the spirit of one young activist, others are now answering the call to serve.  Eleven Hundred Torches seeks to encourage hundreds of ordinary citizens to serve others.  Inspired by the life of advocate and activist Jana Mackey, and motivated into action by her death, this national campaign has been created to inspire others to make a difference.
Jana Mackey served as an advocate and a devoted civic servant.  She worked tirelessly to promote the rights of women, victims of violence, and the voices of many often unheard and underrepresented.  A victim of an unjust crime, she was taken before her time.  We can never replace Jana, but we can help her service live on through others.

On July 9th, 2008, speakers at “Jana’s celebration of life” service called on the 1100 people in attendance to pick up her fallen torch and find the courage to carry her work forward.  It is our hope that her single torch will soon become eleven hundred torches. Eleven hundred others making a difference in our world.
Jana’s legacy can live on with your help.  We ask you to get involved and find a place to serve.  Please click on the links below to see how others have joined our movement:

“Jana was strongly committed to social justice, and in her memory, we hope to
inspire others to share her cause and make a difference.”

Posted by Unknown at 8:52 PM No comments:

On Thursday the 18th, a small team from the Wichita Branch NAACP traveled to the State Capitol Building in Topeka to meet with Representatives from the Governor's office in our continuing effort to bring about substantive policy change in the area of SRS and Child Placements.
We began this effort nearly 5 years ago in response to a number of complaints we'd received from parents whose children had removed from the home and placed in foster or adoptive care. Many of these parents told similar stories of how their children were being placed in home out in Western Kansas where they had no access, many talked about various problems the children faced inside of the foster homes, and many more described a seemingly endless list of courses, tests, and court orders they were required to submit to or they would face the severance of their parental rights.
All of our early complainants were African American, so our initial investigation sought to determine if there was a bias in the system that was impacting African American families. What we determined (pretty early on) was that although there is some degree of disproportionality, the complaints themselves were common to families from all racial and ethnic groups who've had contact with the system.
We began our investigation by calling a series of meetings with various persons representing SRS. Those meetings served to clarify the role of Youthville (an agency contracted by the state to handle child-placements) and our meetings were expanded to include representatives of Youthville. The meetings with SRS & Youthville were later expanded to include representatives from DCCA, and then various judges and members of the Permanency council.
Throughout these dozens of meetings, we have operated from a very simple strategy with three main goals that we've pursued in order. We have sought first to understand the system and all of its complexities, second to isolate the problems and issues, and third to design and suggest systemic and policy-oriented solutions that will impact the greatest number of people with the least amount of effort.

This system has a very steep learning curve. "Child Welfare" has an incredible number of "moving parts" which are divided between a number of independent and autonomous agencies which would easily challenge the effectiveness of any singular study or reform. Law Enforcement, the Wichita Children's Home, SRS - Social Workers, the DA's Office, the Courts, the individual Judges, DCCA, CASA's, Youthville, the Farm; each agency has a distinct role to play in Child Welfare cases. But far from being synthesized, each agency is separate and autonomous, making the final case plan a strange and expensive composite of differing philosophies, practices, court orders and recommendations that the families are mandated to comport with. And if they're not able to meet all the requirements in the prescribed time? ...well then, say goodbye to little Jesse. 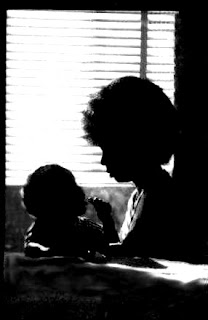 Posted by Unknown at 8:35 PM No comments:

Joe Robertson, boyfriend of Kennah Wilson and father of her unborn child, puts his head down in...

OAKLAND — Kennah Wilson was laid to rest in a white casket adorned with pink roses. Her daughter, Kamilah Robinson, was swaddled in a pink blanket at her side.

The funeral, which attracted more than 400 people to Good Hope Missionary Baptist Church on Thursday, was not just about saying goodbye to Wilson and her baby. It was also an occasion for collective soul-searching on how to end the violence gripping the community.

"Don't let Kennah's life or this tragedy be in vain," said Bishop Bob Jackson, senior pastor of Acts Full Gospel Church. "This kind of violence must stop in our city.

pregnant when gunmen opened fire on her Aug. 29 while she was standing with a group of about 30 other people in front of an apartment building at MacArthur Boulevard and 82nd Avenue in East Oakland.

Wilson was killed. Four other people, including two 15-year-olds, were wounded in the same incident.

Kamilah was delivered by Cesarean section and lived for 31 minutes before she also died at Highland Hospital.

Young men and women proceeded into the funeral wearing T-shirts with Wilson's pictures and glitter-stripped writing reading "Rest in Paradise." The funeral program was decorated with a collage of family photos, including Wilson posing with her 19-year-old boyfriend, Joe Robinson, the father of her child.

those in attendance didn't know Wilson, but were touched by her story. Jackson, for instance, attended the funeral and represented the Pastors of Oakland, a group of more than 40 ministers who work together on community issues and concerns. No prominent city officials attended the service.

Robinson and Wilson's mother, Donna Irving, came to the young woman's aid that night when bullets suddenly struck Wilson in the chest and side. Robinson's brother also was shot twice in the chest during the incident and was transported and later released from Highland, relatives said.

Doctors and emergency staff worked furiously to save Wilson's baby.

Madihah Al-Mustafa of Oakland was part of the trauma team that worked on Wilson that night. Her son, Kenny James, was paralyzed after being shot in 2003. He died in 2006.

"All of us held our breath as we prayed and hoped this sweet innocent baby girl with a full head of black hair would survive," Al-Mustafa said in an e-mail. "I deal with this every single day. In these young people, I watch my son die each day, over and over."

One 14-year-old girl said she and her two friends came to the funeral because they were all friends with Wilson.

"It's crazy when it (the shootings) happens, but you never know when it's going to happen," she said.

Robinson and Wilson dated for two years. When she became pregnant, they planned to move away from the crime-ridden neighborhood.

The five apartment buildings at 82nd and MacArthur have been the site this year of several street shootings of young people under 25.

Oakland Councilmember ﻿Larry Reid (Elmhurst-East Oakland) met recently with Mayor Ron Dellums and officials from code enforcement, the city attorney's office, the police department, parole and probation and the housing authority to address the crime problems that have occurred in front of five buildings in the area.

Reid said he plans to organize a community meeting in the next couple of weeks to address safety concerns and solutions.

However, people at the funeral said they are fed up with talk and meetings and want to see action. They are calling on church leaders, the local NAACP, former Black Panther Party members, and other activists to address the violence.

Duckett did not know Wilson but felt compelled to attend the funeral because of the rash of recent killings at 82nd and MacArthur.

Since Wilson's death, police have increased patrols in the neighborhood. In addition, the city has deployed a team of street outreach workers on nights and weekends to try to diffuse potentially violent situations.

Wilson's relatives say that they will remember how excited she was about becoming a new mother. They said they don't want her memory to be reduced to "just another face on a T-shirt."

Posted by Unknown at 9:12 AM No comments:

Faces of Violence feaures the song; "You're Not Better Than Me"...written and performed by Award Winning singer-songwriter Ellen Bukstel. Her powerful voice is the backdrop to a choreographed black and white photo study representing women and children in the commmunity who are victims of domestic abuse.

of a from a local Childs Advocate Organization .

“Violating statute”  huh..?? yup- Freedom of speech is becoming a violation of statutes and laws. Speak now or forever hold your peace, as yet another civil and constitutional right’ slips away. (don’t think it can happen..? think again.) –KFJA

Oppression can only ‘exist’ through silence’. (Carmen de Monteflores)

The I-Team has been following the case of a former Germantown mother who's been in a two year fight to get her kids back. This week there was a major setback for that mother; she lost her freedom and is now sitting in the Shelby County Jail. What did she do to get there?

She told the truth- and is being punished as such- sadly this is the norm- NOT the exception for EVERY SINGLE Protective Parent- ALL are threatened, gagged and or jailed -